*We will also have some pictures from 2002 through 2012 played on the big screen during some of the electronic sequences for your viewing pleasure! Our set list running time for Saturday, August 18th at the Old Rock House is one-hour and fifteen minutes long.

O.R. celebrates 10 years of throwing it down. 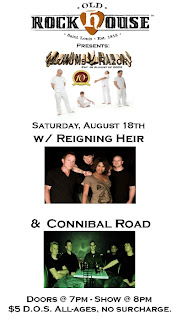 Things have been so busy since we have last done a blog post and I haven't had time to send our email blast out either, so I'll just pick right up where we left off and get to the good stuff. Tuesday, June 5th we did a last minute show at The Firebird w/ Athel and our friends in Fer De Lance. It was our first show there and I was impressed with Athel, myself and our drummer Patrick were asked to say a little something to their camera crew for the tour documentary they are putting together. When it is done, I will try to remember to share it. June, for me personally, was a lot of preparation for things coming up that next month. The second annual Rock University Festival was one example. Which was a blast, by the way. Plus, we have just been busy putting things in order for the digital and physical release of "Decapitated Society". We were able to debut and talk about the new single "Teach Me How To Learn" on 105.7fm The Point's Local Show and Indio Radio. Dia "Live From The Band Room" also played the track and was kind enough to do so for us on her show that airs on Metalholic Radio and Maximum Threshold Radio. The Galaxy Radio at Webster University was actually the debut of it, but I did that to see who was actually paying attention and because they have been kind to us. In addition, the Hard Rock Cafe was the sponsored guest of the Deliciously Alive w/ Kelley Lamm Show at the end of June, so it was nice to have a snippet played and meet some beautiful new faces. Last, but certainly not least, I have to mention my friend Richard. He invited me over to his studio to tape a commercial for Rock U Fest 2012, meanwhile he was streaming his other video productions on facebook. He heads up The Itchy Show and I appreciated his support too. So, that brings us up to speed now.

Saturday, August 18th will be our tenth anniversary show at the Old Rock House! The intentional reason I chose this venue was because of the fact that the operator there was the last person to manage Mississippi Nights, back in the day. Our first show was there in Aug. of 2002, so it seemed like a no-brainer to give them a nod for multiple reasons. We will be sharing the stage with our long time buddies in Reigning Heir and new friends in Connibal Road. This will also be Connibal Road's last show w/ their current drummer too. All of us will play extended sets, we will play at least an hour, if not an hour and fifteen minutes. It's all-ages, no minor surcharge. Five dollars at the door. Incredible venue w/ a parking lot across the street and parking directly behind the venue, plus on the street. It will be a memorable night, for sure! 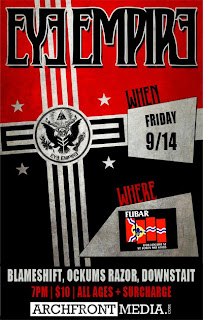 Also, just announced recently was this event happening at Fubar on Friday, September 14th produced by Archfront Media. Eye Empire, Blameshift, Downstait & us w/ another TBA. Click HERE for all of the details and you can get advanced tickets from us cheaper than you can get them the day of the show. Email us at info (AT) ockumsrazor (DOT) com for them and we will also have them available on our store tab for purchase online for a limited time too. It's an all-ages show, $3 minor surcharge. The day of show the tickets will be $10, so if you want them for the "bro", or "sis" price be sure to hit us up or get them online. Stay sharp, we have something real cool for you all next!

Free download. In Memorium. Have a great holiday w/e everyone! "Memories" : http://ping.fm/MvfGO
Posted by Ockum's Razor at 7:51 AM No comments: 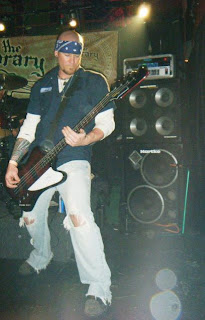 "Timapalooza" happens on June 2nd @ The Warehouse on Jefferson. This is a benefit for the kids of Tim Ott, plus it will serve as a celebration of his life also. $20.00 donation, 21 and up only. One couldn't help but love Tim, he was just that fun guy to talk to and be around generally. He is also known for playing the bass guitar in State Of Mind , whom we shared the stage with numerous times. Right now there are tons of silent auction items that have been donated to his sister and friends for the concert. State Of Mind will also be playing in a tribute to the time that they shared together, creating memories for not just themselves, but for all of us too. We are honored to be a part of the show. Be sure to wear something that is themed from the eighties if you plan to attend. Also, be sure to RSVP on the wall of the facebook event HERE to get tickets from Trista White or Gregg Thomas. Salon Fusion also has some tickets, they are located at 400 Lemay Ferry Road. Another act or two will be named very soon also. It is going to be a great honoring Tim's life with some friends that are more like an extended family really. I just wish it were under different circumstances. Hope to see you there. Stay sharp...

Spring seems to be here and we are happy about that, I'm sure you are too! Friday, March 16th we are playing a FREE show at Atomic Cowboy as part of the Occupy Midwest Conference welcoming people to our city. We play at 9pm sharp. HERE is the event details and acts we are sharing the stage with.

April is on the way and we have a couple more shows that we are also excited about. Thursday, April 19th we will be playing at The Crack Fox w/ our friends from KC Alice Sweet Alice. Another act will soon be added to this bill, as well and it is an all ages show too! HERE is the event details for it. The second show we are doing is on Friday, April 27th at 2720 Cherokee w/ Opiate - The Ultimate Tool Experience. This show is 18 and up. Visit HERE to get info. on tickets and such for this event.

As for the upcoming album, it is all done. Now we just need to raise the money to physically duplicate the compact disks. We have 14 percent pledged so far, but we still have a bit to go. HERE is the info. and links to all of the updates that have been posted so far for Decapitated Society. Our campaiign offers exclusive incentives and a window into our release before anyone else gets that opportunity. YOU get to literally be a part of our release. A portion of the money will also go to Play It Forward, a non-profit that donates and helps fund schools in our city that just don't have the resources they need for music programs. We know money is tight and we know that we cannot do this without you. We appreciate your interest! Stay sharp...

St. Louis Sinner Magagazine hails us as a band to watch in 2012, new video posted for Pledge Music campaign!

We have been busy getting the mix finished up on the new studio material and it is almost there! Become a part of this new album by pledging to exclusives today, watch for the track listing to come soon, the material will equal to a double-disk release. But first, we need your help getting the physical product together. Visit our Pledge Music campaign for "Decapitated Society" today. Speaking of which, this video was just put together by Topher for the campaign. The studio version will feature Jason Cole from Fer De Lance. He nailed it too. Last, but certainly not least, Malice from the St. Louis Sinner Magazine caught us out on the scene and we are featured in the latest issue for February. The article is called,"Bands To Watch In 2012" and we are honored to be in it. Here is a copy of one of our latest tweets, check out the issue online and there is also a snapshot that is cropped so you can see it for yourself. Stay sharp...

TY 2 the STL Sinner 4 this, be sure & get your copy around town
or visit the issue online: issuu.com/stlsinner See Bands To Watch 2012

(Come for the music, leave with the answer...)

Posted by Ockum's Razor at 9:18 PM No comments: 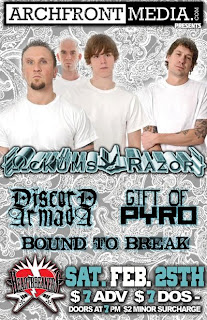 Saturday, February 25th Archfront Media presents Ockum's Razor at Heartbreakers! Special guests are Discord Armada, Gift Of A Pyro, & Bound To Break! This is an all ages show. Tickets are $7 and the doors open at 7pm. Email info (AT) ockumsrazor (DOT) com for cheap advanced tickets. 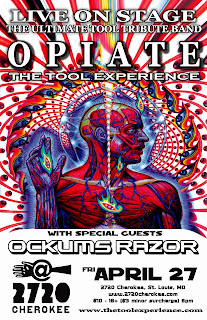 Friday, April 27th we will be kicking of an incredible show at 2720 Cherokee. We will be performing before Opiate! Be sure to get your tickets in advance for Opiate - The Tool Experience w/ Ockum's Razor in advance. This is an 18 and up show, tickets are $10 and there is a $3 surcharge for minors. Be sure to get there by 8pm, that is the time listed in the event. Also, see the event page linked above on how to get advance tickets.
Posted by Ockum's Razor at 9:05 PM No comments:

Ockum's Razor
Saint Louis, MO., United States
Haven't you ever heard of Ockum's Razor? The simplest explanation is probably the best one. Our name is Ockum's Razor and we are an original rock music artist from Saint Louis, Missouri that originated in 2002, specializing in rock along the lines of Faith No More, Alice In Chains, Sevendust & Tool. Genres consisting of everything from acoustic to metal. We look to each other's similarities to better harness the music from deep within, enriched with pure emotion and the vastness of the human condition, we filter our vision through the eyes of: Ockum's Razor. *For inquiries email: booking (AT) ockumsrazor (DOT) com

Subscribe to the official blog of Ockum's Razor by Email HERE